We now have five places left for private students (1 to 1) as well as places for our summer vocal workshops.

If you're interested in any of the above plaese fill in and submit our application from. ﻿

Become a member of Singer Surgery here and benefit from our member specials, the Vocal Gymnaisium and much, much more! ﻿

Check out our FREE Downloads page and see what goodies we have for you! ﻿

Recommend this page on:

The Role of The Larynx 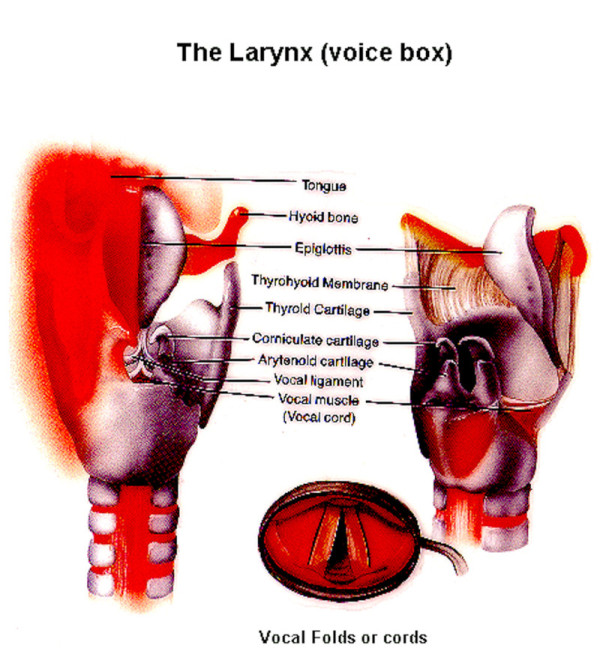 The larynx lies between the Trachea (windpipe) and the Pharynx (throat), the upper part of the airway (see Fig 1).

It consists of sections of tough flexible cartilage that protrudes at the front of the larynx to form the ‘Adam’s apple’.

Partly covering the larynx is the epiglottis - a pear shaped sheet of elastic cartilage - which moves on swallowing, blocking the larynx so preventing food from entering the windpipe.

The thyroid cartilage is linked to the trachea by the cricoids cartilage, which is shaped rather like a signet ring. Between this and the inner surface of the Adam’s apple, are two fibrous membranes, known as vocal folds, which are responsible for voice production.

Men’s vocal folds measure between 20--35mm and women’s between 15-20mm. If the muscles of the larynx, which are activated by nerves leading to the brain, are damaged the vocal folds become paralysed leading to voice loss.

Try this little experiment; hold your lips together very tightly and blow, you will hear a buzzing sound. It is this vibration of the lips that first sound the trumpet, enabling it to resonate.

So, as you can see, the mouth of the trumpet player becomes the larynx for the trumpet and the lips the vocal folds.

This is a very crude and basic explanation of the larynx, but I am sure that you get my drift. Just as with our voices, it is the air passing through the vocal folds that caused them to vibrate and go on to be resonated. 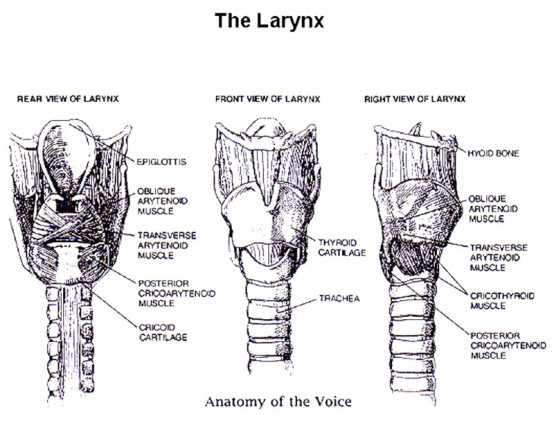 Most of the time the vocal folds lie apart forming a triangular space called the Glottis, through which the air we breathe passes

When we speak, the muscles beneath the vocal folds close, forming a narrow slit that vibrates as the air passes through. Surprisingly, it is not this passage of air that causes the vibration.

Nerve impulses from the brain travel to the larynx causing change in the pressure in the vocal folds. It is this that creates sound.

The pharynx, mouth and nose act as echo chambers, which modulate sounds and create vocal resonance.

The vocal folds can vibrate in one of three ways: creak, modle or falsetto, it all depends on how much air is used.

The least amount of air makes a creak sound; the intermediate amount makes a modle sound and the most makes falsetto.

We must learn how to control our vocal folds with our breathing, so that we can choose which tone we would like to use instead of being limited to just one tone.

Remember, when using the vocal folds it’s:  Minimum effort for maximum output, because it’s the breathing that counts! ﻿

You can see more of our videos on the Inner Vocals Technique at our Singer Surgery You Tube channel. ﻿